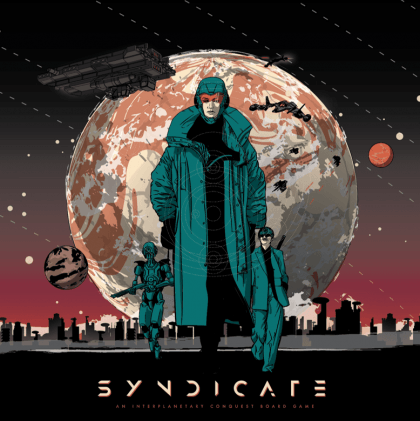 SYNDICATE: An Interplanetary Conquest Board Game

SYNDICATE: An Interplanetary Conquest Board Game by PDU Games is an interplanetary conquest board game for 1 - 5 players.&#10;&#10;It is the year 3105, and humanity has spread to the stars. Following invention of interstellar travel technology in the 22nd century, greed and human desperation fueled a wave of corporate-led colonization of remote solar systems.&#10;&#10;In one recently colonized solar system, Arcturus, an authoritarian regime known as &ldquo;the Sovereign&rdquo; has long reigned over all planets, moons and space stations with an iron fist. More recently, however, following nearly a decade of political in-fighting and civil war, the Sovereign&rsquo;s grip of Arcturus is starting to slip, opening the door for criminal organizations to proliferate.&#10;&#10;You control a young, enterprising criminal syndicate in the outer fringe of Arcturus, trying to stay under-the-radar of the Sovereign while you compete with other criminal syndicates for money, power, loyal crew and advanced technology. Complete missions, set up criminal operations, and take down anyone that stands in your path to building the most formidable interplanetary criminal empire in the system.&#10;&#10;&mdash;description from the publisher&#10;&#10;