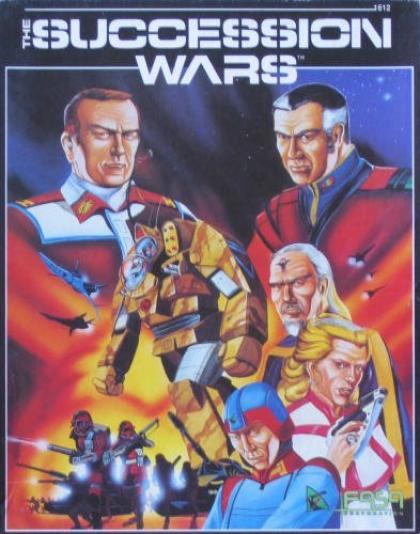 The Succession Wars is a grand strategic game set in the BattleTech universe. The game system is not overly complex, but does feature money (taxing and expenditures), technology levels, and leaders (characters from the BattleTech continuity, who have multiple uses).

Note that despite what the box copy below implies, all five Houses are always in play. Playing with fewer than five players requires at least some players to play multiple Houses.

For over 200 years, the five Successor States of the near-legendary Star League have warred among themselves for dominion over the whole Inner Sphere. There have been three Succession Wars to date, but no victor. The cost of war is high. The leaders of the Successor States must weigh each maneuver to see whether the gain in territory is worth the loss of 'Mechs. Only the most ruthless and brilliant leader will emerge as the next Star Lord.

The Succession Wars is a 2- to 5-player game, where each player assumes the role of a House leader. All the most famous and infamous regiments of the BattleTech universe are at your command - the elite Kurita Sword of Light, the Davion Guards, and the mercenary unit Wolf's Dragoons. The game allows players to fight any Succession War, including the fourth, toward which the Inner Sphere is now building. The game system is simple and fast allowing strategy - not the rules - to be the deciding factor.