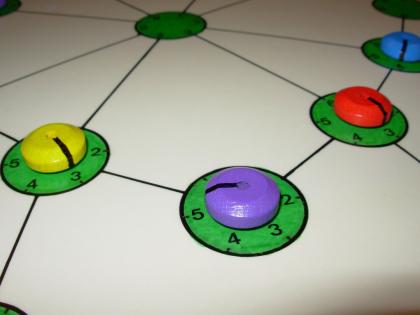 Stronghold is played on a board showing a network of 25 spaces. Each player has 8, 10 or 14 playing pieces, depending if 2, 3 or 4 people are playing.

Object of the game is to be the first player, who manages to have all his playing pieces on the board.

When a playing piece is placed on the board, it's strength is determined by the throw of a die, but the initial strength can well be increased during the game.

Attacks are quite normal in this game and the chances for success depend on the strength of the 2 opponents as well as on the distance between the 2. The playing pieces that loose a fight are returned to it's owner, who must enter them on the board again to win the game!

"Stronghold", "Color Guard", "Tower 6" and "Where To?" are 4 games from Ronald Corn from the 80ies that never found a publisher. They all had interesting mechanics and/or inventive victory conditions - but they had no theme! Since they were not pure abstract games (they used dice, cards or tiles as random elements), this lack of a good theme could be well have been the main reason, why they were never published.