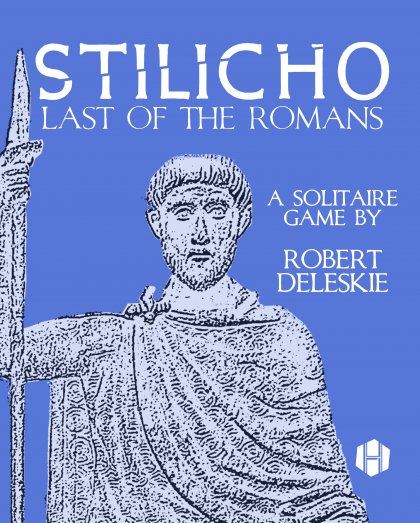 Stilicho: Last of the Romans

The Goths are marching on Rome! In Gaul, Vandals and Alans pour across the Rhine. Meanwhile, a usurper from distant Britannia has raised his standard. The survival of the Western Empire depends on one man: Flavius Stilicho, barbarian general, commander-in-chief of the armies of Rome, and defacto ruler of the West.&#10;&#10;STILICHO: LAST OF THE ROMANS is the long-anticipated follow-up to designer Robert DeLeskie's popular and challenging solitaire game WARS OF MARCUS AURELIUS. The brain-boiling card angst and nail-biting combats that made that game so compelling are back, along with some new wrinkles that make for a more challenging and nuanced decision space. For example, the Surge mechanism that caused so many gamers to invent new curse words is now more nefarious, with each enemy card having specific surge effects. Rome's enemies sometimes bump into each other, resulting in enemy-on-enemy battles. Regions might go into revolt, garrisons might defect to the banner of the pretender Constantine III, and the wily courtier Olympius might turn the emperor Honorius against you.&#10;&#10;No wonder the historical Stilicho only lasted until turn 3! If you want to win, you'll have to last much longer than that, all while taking on tougher and more resilient enemies than poor Marcus had to face, and with less resources at your disposal. Will you prevent the sack of Rome and the fall of the Western Empire?&#10;&#10;-description from publisher&#10;&#10;

Voti e commenti per Stilicho: Last of the Romans