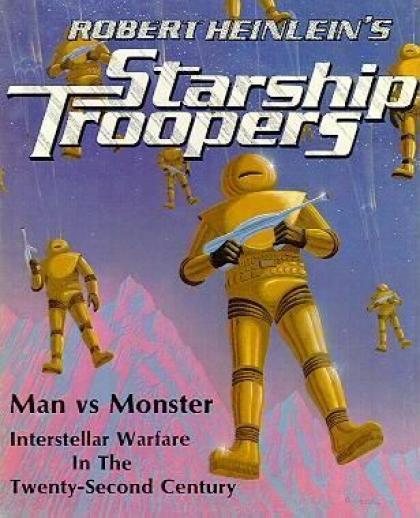 Starship Troopers is based upon the popular novel of the same name written by the dean of science fiction writers, Robert A. Heinlein. In the novel, Heinlein describes a futuristic war involving homo sapiens from our Earth (Terrans) against a Humanoid race (nicknamed the 'Skinnies' for obvious physical attributes) and their cobelligerents, the totally alien Arachnids. Since this is a story of future wars and future advances in technology, much is changed in the fields of weaponry and tactics and strategy. One thing remains the same, however; the fighting still rests on the shoulders of the individual infantryman. Although great starships has shuttle men between the distant solar systems and the power of individual weapons has risen to awesome heights, wars still cannot be won unless men venture onto the face of alien planets and fight the enemy on their home ground. As Juan Rico, the protagonist of the novel, relates:

"We are the boys who go to a particular place, at H-Hour, occupy a designated terrain, stand on it, dig the enemy out of their holes, force them then and there to surrender or die. We're the bloody infantry, the doughboy, the duckfoot, the foot soldier who goes where the enemy is and takes him on in person."

Although the mission remains the same, future inventiveness has changed the method considerably. In a galaxy-wide war, manpower is at a premium. Platoons fight where entire armies once tred. But these platoons possess the firepower equivalence of a Twentieth-Century mechanized division. More importantly, each man in the platoon is provided with a piece of hardware that allows him to fight and survive in the holocausts of future combat—his powered armor suit. As Rico describes it:

"A suit isn't a spacesuit — although it can serve as one. A suit is not a space ship but it can fly—a little . . . Suited up, you look like a big steel gorilla, armed with gorillasized weapons. But the suits are considerably stronger than a gorilla. If a Mobile Infantry man in a suit swapped hugs with a gorilla, the gorilla would be dead, crushed; the man and the suit wouldn't be mussed . . . The real genius in the design is that you don't have to control the suit, you just wear it, like your clothes, like skin . . . Even riding a bicycle demands an acquired skill, very different from walking. But a suit you just wear."

With the suit and the incredible array of weaponry that go with it, the Mobile Infantry soldier is an exceedingly formidable opponent. He had better be. The enemies he faces are the most awesome adversaries in the galaxy. Of the two extraterrestrial races fighting the Terrans, the Humanoids are the least revolting. Rico describes them as

" . . . humanoid, eight or nine feet tall, much skinnier than we are and with a higher body temperature; they don't wear any clothes and they stand out in a set of 'snoopers' like a neon sign."

In early scenarios they are fighting on the side of the Arachnids. In later scenarios, after successful negotiations with Earth, they switch over to the Terran side. They're only effective fighters within the confines of their small city terrain and strong points on the board.

But the 'Skinnies' were mild looking in comparison to the Arachnids:

"The 'Bugs' are not like us. The Pseudo-Arachnids aren't even like spiders. They are arthropods who happen to look like a madman's concept of a giant, intelligent spider, but their organization, psychological and economic, is more like that of ants or termites; they are communal entities, the ultimate dictatorship of the hive . . . But don't make the mistake of thinking that they act purely from instinct . . . their actions are as intelligent as ours (stupid races don't build spaceships!) and were much better coordinated. It takes a minimum of a year to train a private to fight and to mesh his fighting with his mates; a Bug warrior is hatched able to do this ..."

As the Arachnid Player, uses an Alien Control Pad sheet to record the placement of his underground central Hive cell complex and the attached tunnels radiating outward. Tunnels are used to move the Warrior units, along with Worker units mixed in as expendable decoys, to locations where they can pop up to the surface through a breach hole and attack the Terran units. Completely unseen, and only paper recorded, Engineer units are used to create the breaches and, later, to extend the tunnels.

The game is set up in a "Programmed Instruction" system of scenarios to slowly introduce the game concepts. Scenarios range from Scenario I, which starts players off with a basic MI raid on a Skinny city (just like the book. "Flores died on the way up") to Scenario VII, The Battle of Klendathu: the final Terran assault on the Arachnid Homeworld.

Warfare in the Twenty-second Century is the ultimate test of survivability of the human race. It was a very near thing.