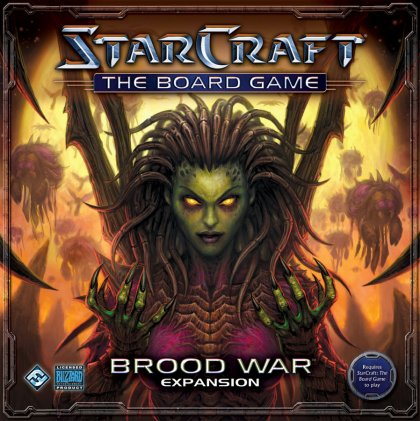 Starcraft: Brood War brings the events that occurred in the videogame expansion to the boardgame. With the shattered Zerg hive torn apart by fierce infighting, the Protoss seek to reunite with their Dark Templar brethren and begin rebuilding their devastated homeworld, Aiur. Terran Emperor Mengsk I, having achieved his goal of total domination over the human colonies, must now face two formidable threats. On one side is the rising power of the woman he betrayed – Kerrigan, now the infamous Zerg Queen of Blades – and on the other, a malevolent conspiracy deep within his own ranks. This expansion to the award-winning StarCraft: The Board Game provides a wide range of new units, planets, orders, technologies, and more. Included within are brand new rules for: Leadership Cards: Faction customizations providing devastating powers and advanced strategies for each of the six factions. Heroes: Powerful units whose unique abilities can turn the tide of battle. Scenario Play: Story-based missions that offer a brand new way to play the game. Fight to save the Dark Templar homeworld from Zerg infestation or attempt to destroy the Zerg Overmind to free the galaxy from its tyranny! Expands StarCraft: The Board Game Expanded by: StarCraft: Brood War Promotional Leadership Cards