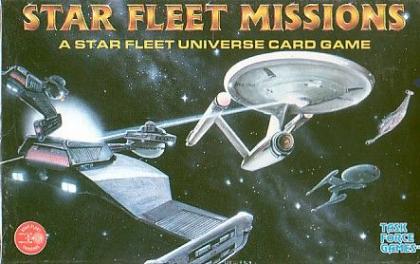 This has been called "a variant of Top Trumps set in the Star Fleet Universe," though it's closer to Whist because the trump suit is selected before the cards are.

Each round a mission card is read, including winning criteria (see below). Each player then secretly commits a ship card to it from their hand of five. The winner of the round is the player whose ship best meets the mission's criteria.

Ships are rated for Space Combat, Marines, Diplomacy, Science, and Cargo. Most missions will only use one of these (i.e., "highest Space Combat wins") while some use two combined (i.e., "highest total of Science and Cargo wins"). A few missions add special conditions; ships sent to defend against Gorn attack may not be Gorn, for example, while the Romulan Civil War excludes all but Romulans, and negotiations with alien pacifists go to the highest Diplomacy after Space Combat and Marines are subtracted.

From the rule sheet cover:

Each Ship Card represents a starship. there are 18 cards for each of six "races" (Federation, Klingon, Romulan, Gorn, Tholian, and Orion Pirate), for a total of 108. (Race means "nation" or "empire.")

Each Ship Card shows the class (type of ship), the name of the specific ship, and five Ratings which are used to determine the suitability of a ship for a given Mission. These Ratings vary from 1 to 16.

The other two Ship Cards represent starships with Legendary Captains and are the most powerful Ship Cards in the game. All five Ratings are 20!