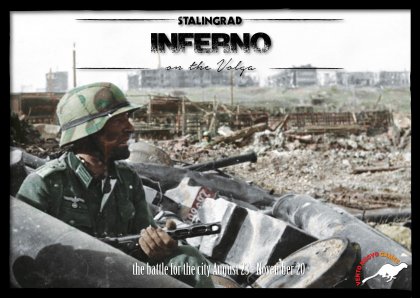 Stalingrad: Inferno on the Volga

Stalingrad: Inferno on the Volga recreates one of the most epic battles of World War 2 with a game mechanism that makes this work in FOUR different game modes, including a true solitaire (versus AI) version.&#10;&#10;The well-known campaign became a clash of wills between Adolf Hitler and Joseph Stalin, involving hundreds of thousands of troops in a death struggle which eventually led to the German defeat in the entire war.&#10;&#10;Inferno's map is generated from highly detailed air recon photographs and depicts both the city and outskirts in extreme detail, as it was in August 23, 1942, when the battle began. The map scope includes the main city and the its suburbs from Lateschanka to Kuspornoe, along 30 km of the volga river, and extends to the west as far as Gumrak Airfield, Orlovka, and Alexandrovka. Map scale is 1:33000, with hexes that represent 1,1 kilometer along each side.&#10;&#10;The wooden-block units in the game represent regiments for the Germans (with some assault battalions) and brigades/divisions for the Soviets.&#10;&#10;The game has one campaign, covering August 23 to November 20 and taking from 1 to 2 hours to play. There are several shorter scenarios in development, such as the September attack to the southern part of the city and the October attack to the industrial sector.&#10;&#10;The unit wooden blocks provide fog-of-war and easy recording of strength, while a card-driven system that allows for key historical events and dramatic surprises in battle...&#10;&#10;The game offers FOUR different modes of play:&#10;&#10;Solitaire (German player versus Soviet AI)&#10;Cooperative (two German players vs Soviet AI)&#10;Competitive:2 (German player vs Soviet Player)&#10;Competitive:3 (two German players vs Soviet Player)&#10;&#10;Complexity level is medium/high.&#10;&#10;The game is played out over a detailed 84x60 cm (33&quot;x24&quot;), laminated multicolor mapboard. The game features&nbsp;more than 200 wooden/plastic components and near 50 event cards.&#10;&#10;&mdash;description from the publisher&#10;&#10;