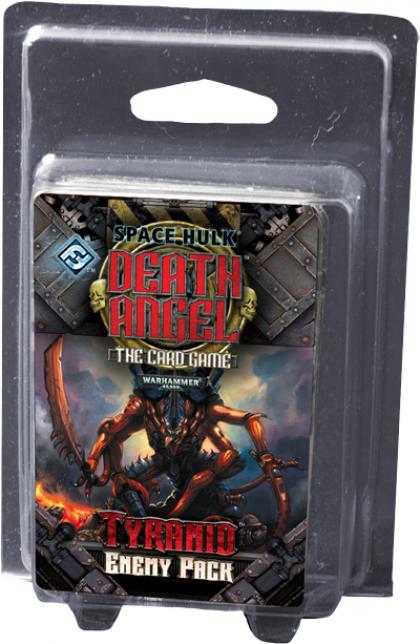 The Tyranid Enemy Pack, a print-on-demand expansion for Space Hulk: Death Angel - The Card Game, includes two additions for Death Angel: a new deck of enemy cards to replace the standard Genestealer deck, and a new Location card type. The new Tyranid deck contains a variety of enemies to challenge even the most seasoned Space Marines, while the Hive Lord Location cards introduce the Tyranid’s epic and deadly overlords!

Not only is the new enemy deck chocked full of Tyranid baddies, but many of them are Elite Tyranids, equipped with deadly special abilities that trigger at different points within the turn sequence. The unpredictable nature of these enemies makes it even harder to coordinate your strategies, creating tenser moments as you make your way to the final location.

Speaking of final locations, the new Hive Lord cards in the Tyranid Enemy Pack offer an even greater challenge for the bravest combat teams. Rather than facing a deadly location, players will go up against a mighty Tyranid overlord, creating a thrilling boss fight for anyone able to survive long enough to experience it.