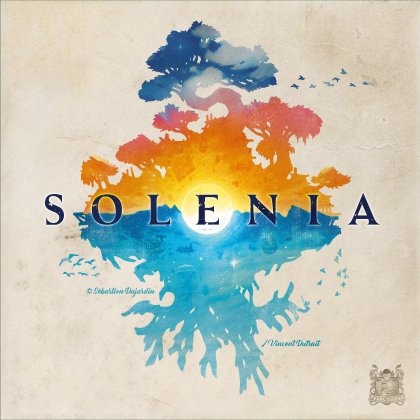 Several millennia ago, the tiny planet Solenia lost its day-and-night cycle: Its northern hemisphere is forever plunged into darkness, and its southern hemisphere is eternally bathed in sunlight. Your mission is to carry on your ancestors' honorable task of traveling the world to deliver essential goods to the inhabitants of both hemispheres. While the Day people want you to deliver the rarest gems and stones, the Night people sorely need wood and wheat to survive. Be efficient and outpace your opponents to collect the most gold stars by the end of the game!&#10;&#10;A game of Solenia plays out over 16 rounds, and in each round, each player plays one card from their hand onto an empty space of the 5x5 game board. You can play the card on either:&#10;&#10;&#10; A floating production island, to gain as many resources as the value of the card you played of the type corresponding to this space&#10; A floating city, to fulfill a delivery tile by delivering the resources depicted on it.&#10;&#10;&#10;You must play your card adjacent to the airship in the center of the playing area or adjacent to another card of yours already played. When someone plays a 0 card, the airship advances one space, then at the end of your turn, you remove the back edge of the board, give players resources based on the cards they have on this strip of the playing area, flip the strip over (turning night to day or dawn to dusk or vice versa), and place it on the other side of the game board.&#10;&#10;The game ends when each player has played all 16 of their cards. The player with the most gold stars wins!&#10;&#10;&mdash;description from designer&#10;&#10;