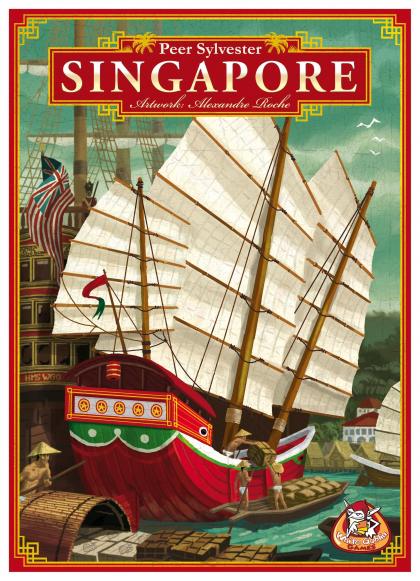 Sir Stamford Raffles has established a post at the southern tip of the Malay Peninsula and is inviting merchants to take ownership of certain plots of land as long as they develop those locations.

In Singapore players are rich merchants who are trading to develop that small outpost into a metropolis. Players own one building at the start of the game, and each round they take ownership of a new lot – with the player who has the fewest points determining who gets which land – and erect a new building. Each building has one or more streets connecting it to adjacent locations, and after building you can move 1-2 workers along the streets to take actions in up to three buildings; these buildings provide a small amount of resources or allow trades of resources/VPs/money for some better combination of resources/VPs/money.

A number of the buildings are black market locations that tend to be more powerful than legit businesses, but carry the possibility of stinging you in the end. Each time you build or use a black market building, you draw a chip from a bag. If the chip is black, keep it; if white, the player who has the most black chips and opium is fined and loses half his opium stash. Opium can be quite profitable, but will the cops catch you with dirty hands before you unload the goods?

In the end, the player with the most victory points wins so find the right balance of aboveboard business and criminal doings.