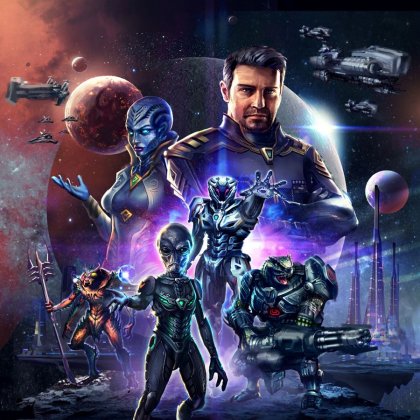 The Silver River is a 4X game that takes place in our own galaxy, the Milky Way, known in some Eastern cultures as The Silver River. The game includes Humans and different alien races, all of which some believe really exist in our galaxy. Races include: Greys Arcturians Reptilians Yahyel Nordics Insectoids Martians Each race has unique special abilities that lend themselves to different play styles. The Deluxe Edition of the game adds the White Lions and the Cyborgs. The Silver River was built to provide a rich 4X experience (Explore, Expand, Exploit & Exterminate), with all its trappings in under 2 hours. Players will take the role of one alien civilization, and work to earn victory points through exploration, colonization, technology, civilization building, politics, war, and peace. Unique gameplay elements include: Simultaneous Production and Resource Allocation: Gain raw production equal to your civilization's population each turn, and then allocate it to your areas of choice during simultaneous Governing phases. Use your allocated resources to take actions. True Exploration: Explore planet-less sectors for rewards. Uncover mini-quests that can be completed for bonus rewards. Choose War, or Choose Peace: Players may enter any occupied sector without forcing war, players always have the option to attack, or not to attack, and may even agree to co-habitate planets together. Fast Tech Upgrades and Ship Movement: Move fleets of ships, whose size is not visible until they arrive, not individual ships. Upgraded technology applies instantly to all ships/planets/etc. This provides real progression in less time, and with less micromanagement. Ally Against Common Enemies: The center of the map is Sagittarius A*, a place where massive space monsters can be hunted for great rewards, on your own, or with other players. Choose Your Victory Conditions: Players will have the ability to choose their victory conditions before the game starts to ensure every player can play the strategies they love, and avoid those they dislike. (War, Explore, Cooperate, Negotiate, Technology, Civ Building, Politics, Production, etc). Unique Domestic Investment mechanic that provides resources and VP to players who pass early in an age to focus on their domestic agenda. This adds a thematic layer to the game and speeds gameplay up dramatically.

- description from the publisher