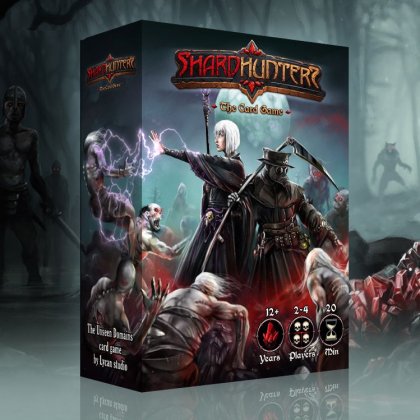 The Shardhunters card game is set in the world of Unseen Domains, a gloomy version of the 17th century Europe, where people infected by a witchplague return as zombies after their death.&#10;In this new world order, the rare and highly valued blood crystals are sought-after by fearless adventurers called Shardhunters, whose bold search for the crystals in the wilderness cannot even be hindered by&#10;zombies, werewolves nor bandits.&#10;&#10;The players can hire adventurers from the tavern deck with the help of blood crystals. Every heroes unique skill, or their combination of, helps to gather further crystals. &#10;The battles between heroes and creatures are rapid but almost unrepeatable, where besides luck the key to success lies in good tactics and knowing you opponent. &#10;During the encounters everyone receives cards from the monster deck, which have only two attributes that need to be studied: a value and a colour. &#10;During the battle rounds, which account as quests for the heroes, everyone plays these monsters simultaneously, which means nonstop action and no idleness. &#10;The game ends when a player is in possession of seven adventurers and then plays a successful quest .&#10;&#10;Gather crystals, organize your strongest heroes and gain victory over the opponents team.&#10;&#10;