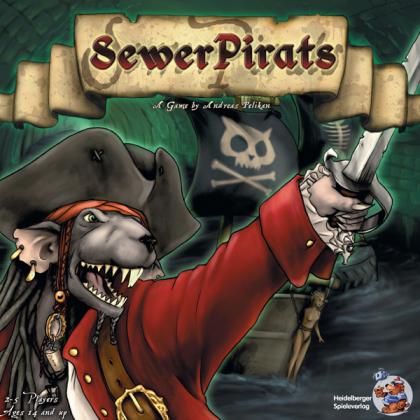 Deep below the world of wasteful humans lies another yet uncharted world, oblivious of the ado of surface dwellers. Only the most courageous creatures from the world above will descend to the mysteries of the underground and board one of the legendary sewer frigates to challenge destiny and to amass immeasurable treasures.

In Sewer Pirats, deep underground in a maze of domed caverns, narrow tunnels, and piped passages, a motley cast of rodents, insects, and other vermin sail the treacherous waters of human refuse aboard bizarre vessels in search of discarded booty. In order to claim the best haul from the abandoned flotsam, players must make careful use of the unique abilities of their crews' rats, cockroaches, weasels, and other critters. Don't settle for less than left-over fast food and dumped toys. Go for your goal to become a true legend among the sewer pirates.

Players compete in deception and tactics to fill the best positions aboard the three pirate frigates. A pirate's rank determines his share of the expected loot – but even the best crew ain't worth nothing without their talismans. Each of the three frigates has its special fetish, and no pirate would dare to board her without the matching talisman for fear of terrific calamities.

Sewer Pirats includes three levels of difficulty as well as thirty detailed pirate figures, twenty Color-Click™ bases, and a rich assortment of game boards, tokens, and cards. Starter rules get you into the game quickly, and a Crew Member Auction variant increases the strategic depth and lighthearted action.