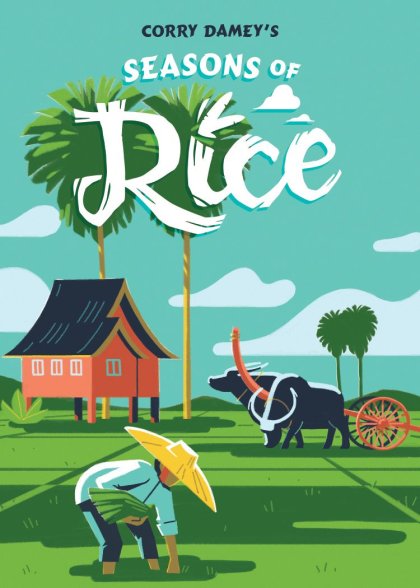 In Seasons of Rice, Corry Damey&rsquo;s 18-card tribute to his Cambodian heritage, players are farmers puzzling together paddy cards to expand their family&rsquo;s &ldquo;landscape&rdquo; of rice paddies and ensure the most bountiful of harvests.&#10;&#10;Players will be drafting cards and placing them into their expanding landscape area to close off paddies in order to score the most points by the end of the game.&#10;&#10;&mdash;description from the publisher&#10;&#10;&#10;A game takes place across two separate seasons (drafting phases): first the Wet Season, then the Dry Season.&#10;&#10;Players begin the game during the Wet Season with a hand of 7 paddy cards. Each Wet Season turn, they simultaneously select 2 cards from their hand: 1 to immediately place into their personal landscape and 1 to place into a communal row of cards called the Dry Season row. Players then exchange their hands and repeat until all cards have been placed.&#10;&#10;In the Dry Season, players take turns selecting 1 card from the Dry Season row and immediately placing it into their landscape. When the Dry Season row is empty, the game is over.&#10;&#10;Players have an opportunity to score points during both seasons by fully enclosing their paddies with paths. They will score for the size of a &ldquo;closed&rdquo; paddy, which can be increased by adding houses, as well as for farmers (a player&rsquo;s family members) and buffaloes contained within the paddy. A player-specific &ldquo;ancestor,&rdquo; representing the guiding spirit of a revered forebear, will also award that player additional points for achieving certain conditions.&#10;&#10;Strategically, opportunities abound in the card-rich Wet Season, when all share in a plenitude of resources and hands overflow with possibilities. Players must still think ahead to the Dry Season, though, when options will rapidly dwindle as the Dry Season row runs out of cards. The deck is micro and rounds are quick, but a sustainable plan for organically generating points is a must across the seasons.&#10;&#10;In the end, the player with the most points wins and may proudly boast of having the most fertile rice paddies in the region!&#10;&#10;