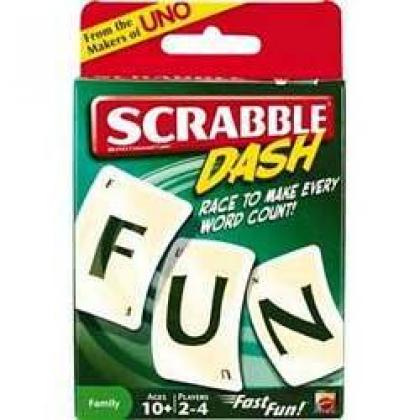 Description from the back of the box:

"Scrabble DASH is the fun, fast-paced word game with cards. Use your letter cards to make a word that can match what the Dash card says and put your cards on the table. It's that simple. But everyone's racing against you to get their word down first so move fast!"

Each player has a hand of 7 letter cards - initially 5 consonants and 2 vowels, but as the game progresses players can refill their hands freely from the separate vowel and consonant decks to vary the mix.

On each turn, the top Dash card is turned face up, revealing the goal for that turn. Players then race to play a word from their hands to fulfil the Dash card, or skip the turn to discard cards and draw new ones.

The Dash cards include criteria such as number of letters (ranging from 2 to 4), specific parts of speech (verb/proper noun), or specifying that the word has to start, end with, or contain a particular letter, drawn at random from either the vowel or consonant deck (players do not need to play their own copy of this letter from their hand).