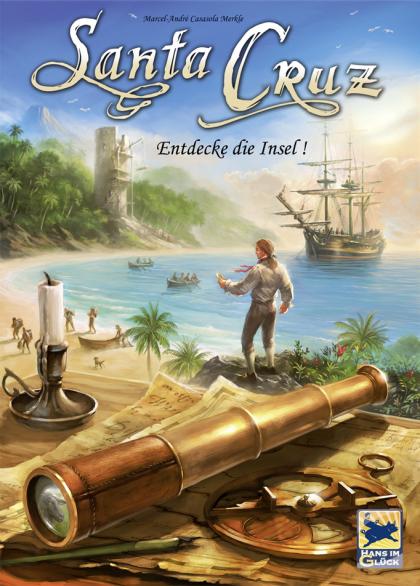 Santa Cruz is played in two independent rounds in which players build homes, churches and lighthouses on the island while also developing valuable resources.

Players each start with a hand of cards, comprising traveling cards and scoring cards. They then explore a board showing three islands, which have tiles laid face-down representing buildings and places, such as churches and lighthouses. On a turn, players must play either a traveling card to explore and place buildings in their color or play a scoring card to score a particular type of building, resource, or other game condition for all players. Spaces near the central volcano are more valuable, but are vulnerable to a negative eruption scoring card.

If that volcano does erupt, the magma might clear away the buildings already constructed. Bad luck? Well, use your experience from the first round to build better in the second. You won't make the same mistakes a second time, will you? Concentrate on the further colonization of Santa Cruz and score while you can!