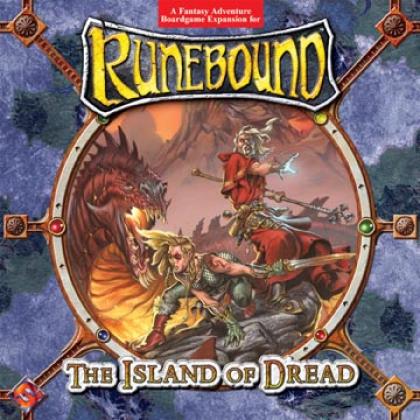 Runebound: The Island of Dread

Belongs to the Runebound Series.

From the Fantasy Flight Games Website:
"Explore the uncharted islands of the world of Runebound and piece together the lost map to the fabled Island of Dread! By sea or land adventure awaits all brave heroes, whether they swing swords or cast spells.

This is the first full-size expansion for the Runebound fantasy adventure board game. Island of Dread features a gorgeous new board overlay that creates a completely new game environment. The expansion set also features 110 new cards, including new characters, encounters, challenges, events and equipment.

The expansion also presents new rules for ships that characters can hire to transport them among the scattered islands of the dangerous seas in their quest to find the Island of Dread and win the game. Not all ships are created equal, however, and you get what you pay for: The Vulgar Princess and her crew might come cheap, but they might also seize all your loot and dump you overboard."

Runebound: Island of Dread is the first Big Box Expansion for Runebound (Second Edition). It replaces some elements of the original game - including the map and playable characters - to provide a new and different gaming experience.

You must own the Runebound basic game to play this expansion.

Voti e commenti per Runebound: The Island of Dread