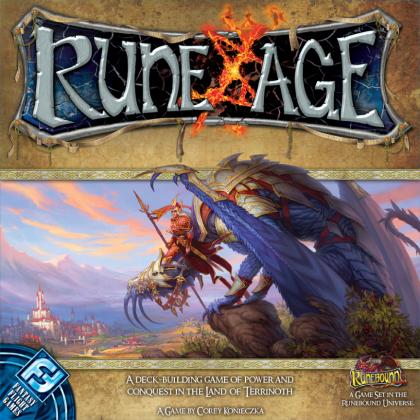 An age of innovation and discovery is at hand. With war on the horizon and whisperings of a prophetic storm approaching, now is the time to gather all your strength and set out to forge your place in Terrinoth's book of legends!

Rune Age is a deck-building game of adventure and conquest for 1-4 players. Set in the fantasy realm of Terrinoth (Runebound, Descent: Journeys in the Dark, Runewars, and DungeonQuest), Rune Age puts players in control of one of four races, vying for dominance in a world embroiled in conflict.

Designed by Corey Konieczka, Rune Age is a unique deck-building game that centers around scenarios. The four different scenarios included in Rune Age present alternate win conditions for players, from an all-out war to determine the victor to a cooperative game experience where players all win or lose together. Scenarios not only dictate the win conditions, they also determine which card types will populate Terrinoth (forming the central card pools) and which Event cards will form the Event deck. The Event deck contains thematic challenges, enemies, and happenings that are tied to the chosen scenario, creating a new play environment each turn.

Gameplay in Rune Age centers around players working to develop their individual deck of cards. At the beginning of the game, each player begins with a small assortment of cards in their deck, drawing five cards each turn to carry out their actions. Each player's deck represents their faction's military strength and capabilities. These decks will be formed with their faction-specific Unit cards and a central collection of Neutral Unit cards, Tactics cards, and Gold cards.

While players begin with limited cards in their deck, through cunning and strategic use of their available cards, players can expand their deck to create a destructive force of their own clever design. Will you create brutal deck of formidable Units? Or will you rely on Gold and Influence to acquire neutral forces and powerful Tactics?