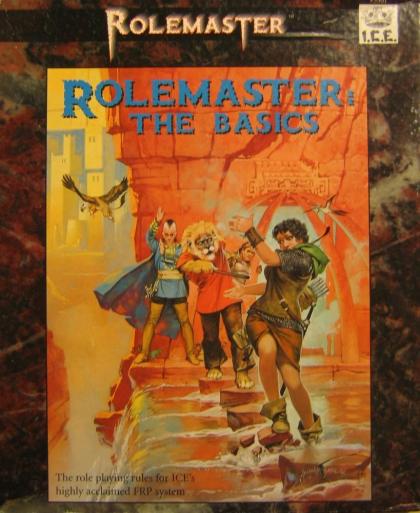 Rolemaster is a detailed, state-of-the-art FRP system that adds realism and depth to your campaign without sacrificing playability. Rolemaster: The Basics provides all of the elements that you need to learn to play in one of the most realistic FRP systems available. Experience the ultimate in fantasy role playing: Rolemaster.

A selection of Rolemaster's wide range of flexible character creation choices - 5 races, 9 professions, and 20 training packages. This allows GMs and players to learn the basics of Rolemaster without having to immediately deal with the myriad of choices provided in the Standard System.
A selection of spell lists from Spell Law - all of the spells for the 9 professions included in Rolemaster: The Basics.
A selection of attack and critical tables from Arms Law-this is all you need to resolve weapon and animal attacks.
Detailed material for unique character backgrounds, including: a wide variety of background options and a system of role traits (motivation, personality, etc.).
A system of temporary and potential stats determined by using a combination of assigned and random elements.
A skill development system that allows a character to develop his ability in any skill without absolute restrictions. Each skill is grouped with other related, similar skills in a skill category.
Complete, consolidated guidelines for resolving all actions: moving maneuvers, static maneuvers, and attacks.
Action sequencing based on an initiative roll and how fast a character attempts to perform the action: as a snap action (quick, but with a penalty), as a normal action, or as a deliberate action (slow, but with a bonus).