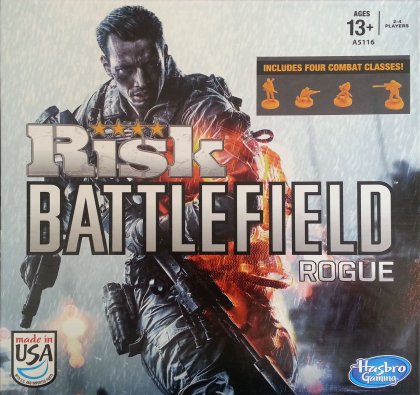 Risk Battlefield Rogue combines the tactical squad-based team play from the award-winning Battlefield series with the strategy and skill of the Risk game.&#10;&#10;The game comes with nine different scenarios, each with its own victory condition. In each scenario, you choose tiles to combine to form the battlefield. Then, you use squads to achieve your objective. You might be fighting to control a zone, placing units in a certain location, or eliminating your opponent's units. There are three levels of play: Boot Camp, Intermediate, and Advanced. The Advanced mode includes rules for air support, destructible cover, special commander powers, and class-specific powers.&#10;&#10;On their turn, players will draw cards based on how many and which type of control points they own, move aircraft, fight other aircraft, move one squad, and fire with one squad. The game's cards allow players to recruit new units, call in airstrikes, or manipulate combat odds by upgrading the specialized attack and defense dice to more powerful ones with better results. The winning player or team is the one that accomplishes the stated victory condition on a scenario, usually by holding a specific set of territories or eliminating an entire opposing force.&#10;&#10;