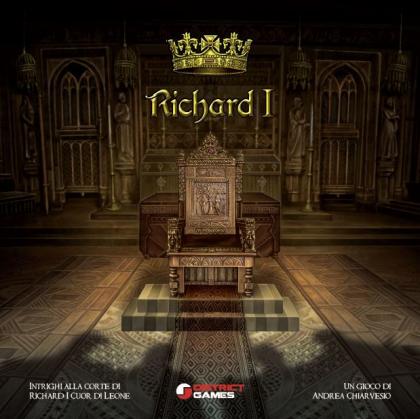 England, a land so harsh that forged heroes and conquerors, where the people are so indomitable that not even the Roman Empire managed to subjugate them. England has built an extensive empire on which the sun never set, vastly extending its domain beyond the British Isles on the spur of the Plantagenets, a royal lineage that dominated much of medieval European history, a dynasty forged from steel and blood, a lineage that would prevail for more than half a millennium. Plantagenet is a name that inspires admiration among enemies and fear among allies.

Henry II, the first Plantagenet king to extend and stabilize his domains, contracted a political marriage with Eleanor of Aquitaine, a marriage intended to generate heirs to the throne. This strategic alliance by marriage produced four heirs: children who would rebel against their own father, more than once, leading to war, bloodshed and pacification, the stuff history is made of.
Who is going to inherit the throne? Who will prove to be worthy of the illustrious name of Plantagenet? After years of battles and rivalry, only two of the heirs survived.

The first, opposed by his own father, is a man with a destiny marked out by his own land, which he rarely set foot on as he was preoccupied for his entire life in conquests beyond the British Isles. The hope of an entire era would depend on his choices. The difference between being the usurper or the chosen one would depend on his actions. He is Richard I of England, better known as Richard the Lionheart.
The other, the last born, was far removed from the throne. Overshadowed by his own family, derided by his own people and saddled with the unfortunate title of “Lackland”, John Lackland had the opportunity of a lifetime: Richard left for the Crusades and John could claim the throne for himself in Richard’s absence. But would he have the mettle of a king? Would he surpass his more illustrious brother Richard? Would he be able to counter his brother’s supporters?

A wise choice as to with whom to form an alliance is crucial to one’s place in history. Only brave choices will crown the true king of England, and only those who loyally and valiantly supported him in the conquest and administration of the kingdom would be remembered in history. This is a choice that only the strong and the wise would make.This is history.

In Richard I, the players assume the role of the characters who remained in England when King Richard I left for the Crusades. They have to decide which side to take without knowing whether Richard I will return home a victor with glory and riches, or he won't come back at all (but there are many possible intermediate outcomes).

During the game, the players take turns to influence the different characters available in order to earn prestige points (PPs) for themselves, but also to use their powers to influence the Crusade from far away by sending resources. A player might even decide to betray his own side, if worrying news were to come from the East...

At the end of the game, the outcome of the Crusade leads to an increase of PPs for the players who were deployed by the faction which has achieved its goal, but the game has only one winner: the player who has accumulated the most PPs, regardless of the faction to which he belongs!

The object of the game is to amass the most Prestige Points (PP) by wisely choosing alliances and exerting influence on the performance of the Crusade.

Voti e commenti per Richard I