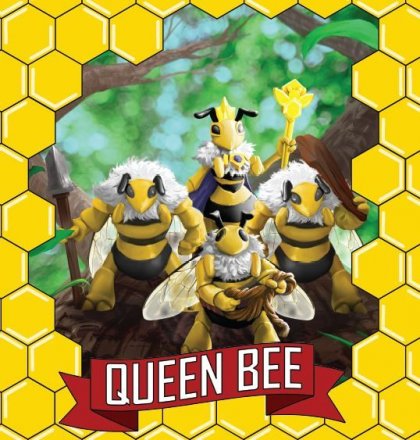 Queen Bee is an award winning 2-4 player game where you attempt to protect your Queen Bee and overthrow the other Queen Bee(s). In a 3-4 player game you will want to attack quickly because once you defeat the Queen Bee of another colony then their bees become loyal to you. Increase your army, be on the attack, but don&rsquo;t forget to protect your Queen! The game includes custom cards to manipulate your dice, affect your opponent or increase your power. The game ends when only one Queen Bee remains.&#10;&#10;The game involves area-control, combat, hand management and dice manipulation. It rewards teams on the move and attacking by having more &ldquo;attack&rdquo; only cards and tie-breakers where the attacking teams win. If you want to have the last Queen Bee remaining then you will want to be on the move early.&#10;&#10;Queen Bee won Best Game in the 2019 BGG Two Player PnP Game Design Contest.&#10;&#10;&mdash;description from the designer&#10;&#10;