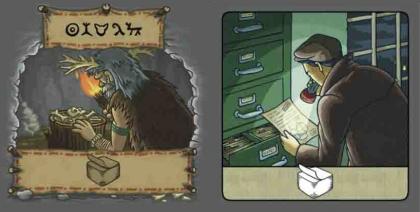 Power Grid: Oracle & Industrial Espionage (Funkenschlag: Orakel & Industriespionage) are two promotional cards for Power Grid and Power Grid: The First Sparks that were first available in October 2012 for a donation at the 2F-Spiele booth during Spiel 2012. The donation is for the self-organized youth center and youth cultural center "Die Friese" located at Friesenstraße in Bremen, Germany.

The First Sparks: Oracle card (by itself) was included in Spielbox 2013/#2, and since November 2012 both cards have been available through the BGG Store.

Both cards give a single player information about the topmost card in the power plant or technology draw pile. After buying a card from the market, the player must give the Oracle/Industrial Espionage card to the previous player in turn order.