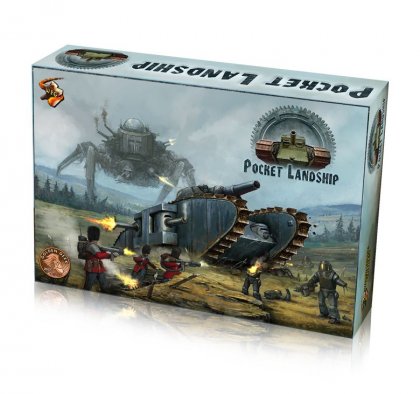 Pocket Landship is based on the print and play Board Game Geek Award nominated (2017) soloplay card wargame. In this version we see a steampunk theme and expanded gameplay with additional enemy and friendly options, as well as multiplayer options.&#10;&#10;Command a Landship (the original British term for tanks) to clear a sector of enemy infantry, artillery, and enemy mech and alike.&#10;&#10;The player chooses a Landship to control with weapons or support units to create either a single high powered Landship or a more disparate defending force, including a squad of shock troops.&#10;&#10;The enemy appears as waves of enemy mech, artillery, infantry, and mine fields arranged in 2 rows of 3 cards.&#10;&#10;Each turn, the player will roll 3 6-sided dice and assign each die to each of their cards to attack the enemies. Then, for the enemy turn, roll the 3 dice and assign them low to high left to right across the front enemy line, then take the assigned actions.&#10;&#10;Each card has its own damage track. When a card is destroyed, it is removed from the game. Win by destroying all 9 enemy cards. Lose if the enemy destroys your landship.&#10;&#10;-description from publisher&#10;&#10;