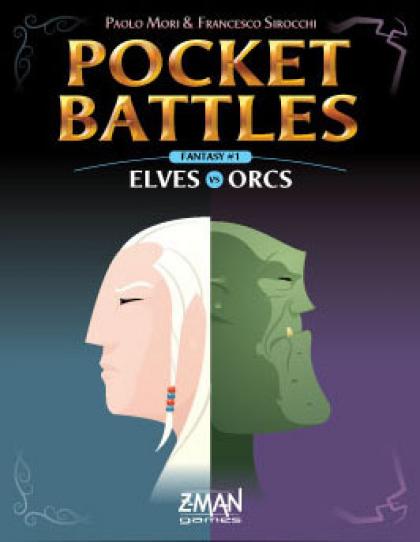 A war game that fits in the pocket!

When pressed for time and table space and the hankering for battle hits, this is the perfect remedy - and it is portable!

Tiles represent troops and troops make up units in your army: just determine the size of the battle and create your own army from a pool of existing troops.

Each tile hits on certain rolls, and some can only melee while others can shoot. Some tiles also have special traits which can affect their whole unit or their whole army.

Armies fight in three sectors - the battlefield. The goal is to eliminate at least half the value of your opponent's army.

The series is designed to have each army fully compatible with any other, so it will be possible, for example, to fight with orcs against Romans, or to have a mixed army of elves and Celts.

The basic rules of the game are fairly simple; two armies face each other in battle. The armies are split into three columns and two rows. Players must decide, at the start of the game, how many points they will give to their armies, determining how many points it will take to defeat the opponents army. (At least half of the points).

On your turn; you have to choose which faction of your army you will send off to battle! Attacks are made by using Order Tokens. If no Order Tokens are present on a unit, it costs just 1 token to issue orders to that unit. Issuing orders to the same unit in the same Battle Round would cost you the number of tokens present on the unit, plus 1. (So if there is one token on your unit, it would cost you two more tokens; if you had three, it would cost you four tokens, and so on).

When one army has eliminated half of the other's original deployment value, that battle round concludes the game, and the player who has defeated the greatest total point-value of opposing units is the winner.