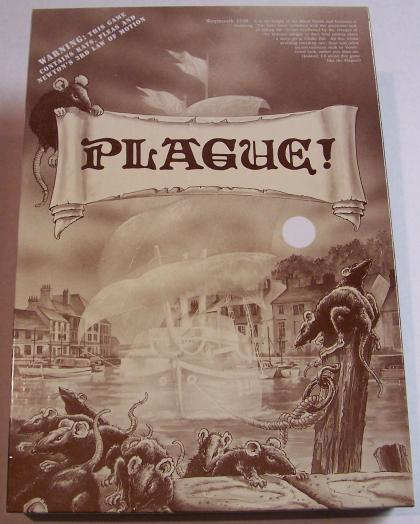 The Black Death was no Weekend Special. A lot of people became poorly, very poorly indeed. In fact, so poorly they had to be taken away because their Immortality was wearing rather thin.
And... as Fate would have it they died right on time, left, right and center. The best place for these unfortunate victims was somewhere deep, dark and damp. Not too much unlike a pit (and people were dying to get there).

Plague! Is a germ-free board game, we hope, for those of you who dare to transport wagon loads of infected victims to their final resting place, a deep pit at Clarks Hill.
Object: Inspired by the yodel 'Bring out your Dead' the object of the game, for those who wish to play, is for each player to control a wagon which is used to visit the houses. Plague victims are 'claimed' and taken away to a burial site. All this whilst avoiding rats and fleas. The first to 'bury' 99 victims wins (remember, you're only doing your job). The winner must now go off and infect the rest of England.