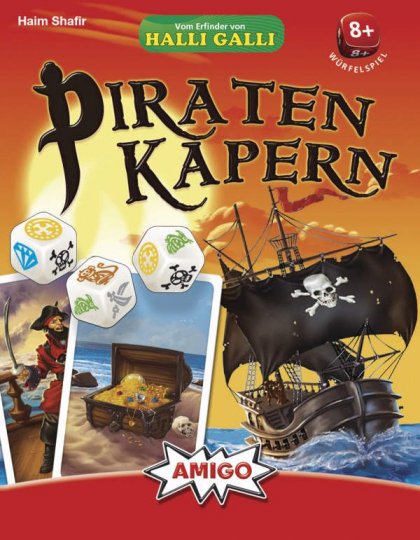 Piraten Kapern (&quot;Pirate Capers&quot;) is the German version of the 2011 game Otsarot o Tsarot, published by Shafir Games in Hebrew and English. It's part of a line of combined dice-and-card games that publisher AMIGO Spiel introduced in 2012.&#10;&#10;As you might expect with a game titled Piraten Kapern, players must set off in search of treasure, pushing themselves to find as much as possible without losing their heads.&#10;&#10;At the start of a turn, the active player rolls the eight special dice. He must set aside any skulls rolled, and his turn ends immediately with no score if he rolls a third skull. The player is free to set aside any number of other dice, rerolling the rest. He may continue to do this until the skulls get him or he stops. He then scores for dice combinations, with a three-of-a-kind earning 100 points, a four-of-a-kind 200 points, and so on all the way up to an eight-of-a-kind earning 4,000 points. Each gold or diamond showing is worth 100 points on its own. A player earns a 500 point bonus if all eight dice score.&#10;If a player is not able to set aside any valid dice, all points are lost.&#10;&#10;If a player rolls four or more skulls on his first roll, he heads to Skull Island for the turn, setting aside those skulls and continuing to roll as long as he sets aside at least one skull each time. Once he stops, all other players lose 100 points for each skull showing.&#10;&#10;Before a player starts to roll for his turn, however, he draws a card from the pirate deck, which affects what's possible on that turn: He might score double for the treasure he collects, or need to roll sabers to fight off other pirates, or receive a free diamond or gold coin, or be able to score treasure even if he collect three skulls.&#10;&#10;Once a player reaches 6,000 points, all other players take one final turn, then the player with the most points wins.&#10;&#10;