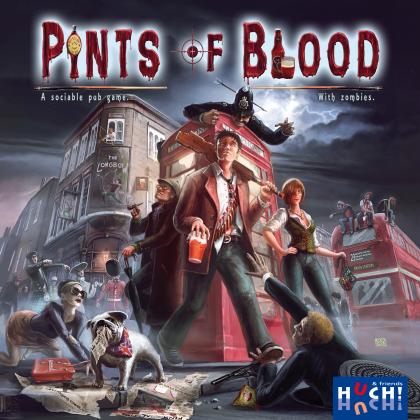 Some old habits die hard. As the city is unexpectedly hit by disaster, and its inhabitants are slowly turning into hordes of hungry undead, an ever-growing assembly of zombies is beginning to queue outside a little corner pub. Inside a small group of patrons suddenly becomes aware that the evening is going to be more than just beer and snacks, and they're forced to take up whatever arms are within reach to avoid the fate of ending up as someone else's snack.

In Pints of Blood, you must keep the zombies from entering the pub, and they're outside ready to move forward whenever they see any sign of life at the windows or door – or if they're pushed from behind by the ever-increasing number of zombies that are being brought in by the still running public transport.

But no need to despair as help is on its way! Rally with your fellow survivors and hold out until the rescue vehicle makes its appearance. Be aware, however, that it might not have room for everyone, so at some point you may have to decide whether to support your mates or to fight for yourself — but if all buddies die before help arrives, the zombies win.