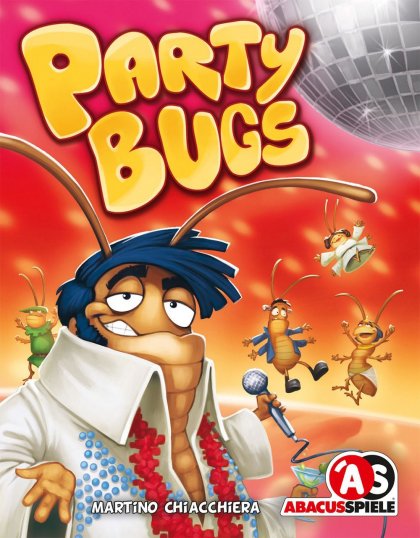 As soon as the lights are off in the card game Party Bugs, the cockroach costume party begins. But who wants a shindig like this in their apartment?! Better send the biggest pests to the neighbors &mdash; and when two party guests show up in the same costume, they'll go home embarrassed anyway, so maybe you'll find a way to escape this party after all!&#10;&#10;Each player has a set of cards numbered 1-13 and simultaneously plays a card that is then placed openly in the center of the game. Then each player plays another card - whoever played the lowest card may choose one of the cards from the previous rounds first, then second lowest player, etc. After everyone has taken a card, the cards from the current round are placed in the center. A player who plays their 13 takes all cards from the center. Cards you take count their point value as negative points, but if you get two of the same cards, you may discard them. The game ends when all cards have been taken. Lowest number of cards wins.&#10;&#10;