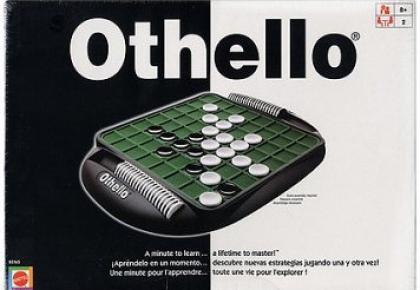 Trap other pieces between your own to capture them, but be aware that the opponent may do the same. Pieces will change sides (colors) dozens of times. The winner is the one with the most pieces when no more pieces can be played on the board.

In Hong Kong, an advertising campaign by Texwood for its Apple Jeans involved the use of Othello sets, retitled Ping Guo Qi (Apple Chess). The sucess of the campaign raised the popularity of the game, and Ping Guo Qi or Apple Chess has since become an alternative name for Hei Bai Qi (Black and White Chess), the more traditional name for the game.

Goro Hasegawa changed Setup of Reversi a bit and renamed it as Othello inspired from Shakespeare's play.

A minute to learn...a lifetime to master!