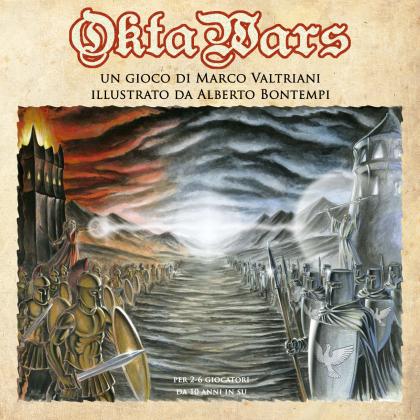 Oktawars is the official prequel of Oktagrid.
In the box you'll find over 60 pawns, towers, sheets, dices, special tokens and a wooden modular board, a quick reference sheet and, obviously, the game rules.

Let's see the story of the game...

Once upon a time, there were eight Mages.
They lived on the Island of An, ruling eight realms, and battling each other in small skirmishes...
A great war seemed unavoidable...

And the game begins.

To avoid the great, final battle, Pedramor the White, Keeper of Peace and Master of Light, begins to create a powerful artifact, a boardgame named Oktagrid: if activated, every attack spell will be immediately countered, depriving all the Mages of their primary offensive weapon.

But, before the activation of the Oktagrid, two Mages are suddenly killed.
Raksha the Red spreads war all over the land, trying to dominate the entire island, and someone steal the artifact from Pedramor's tower.

The Mages begins a desperate fight one against each other, trying to find and activate or destroy the Oktagrid.

Players take place of the six remaining Mages, to try to save - or conquer - the Island of An.
The game has a multiple-level strategy: winning battles is important as taking the control of strategic areas, and even the search for the Oktagrid takes a heavy role, since the activation or the destruction of the artifact is the only way to end the match.

Every Mage has his special abilities and spells: each wizard fights in a personal way, being selfish and destructive, or protecting and aiding his troops, or even focusing in teleporting soldiers or making them walk underwater.

The game has very original mechanics and a unique setting; game rules are easy to learn but challenging to master in the most effective way.