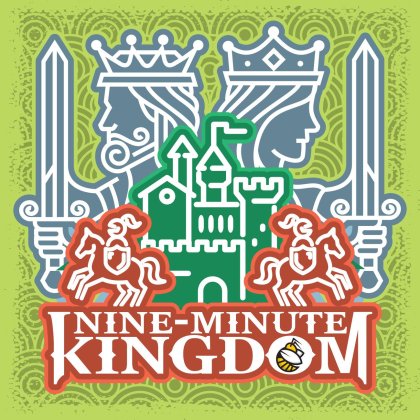 9-minute Kingdom &ndash; A game that takes 9 or fewer minutes to play!&#10;The goal of the game is to build the kingdom for which we get the most points. The players collect points in two ways: by completing the edicts and by connecting the various icons in their kingdoms.&#10;The game is divided into 9 turns during which the players perform actions simultaneously. The players simultaneously pick one card and play it on the table. Next, they pass the unused cards to the player on the left. Using the received cards, the players play another card and add it to their kingdoms. The game continues to the moment of playing the ninth, final card.&#10;Each played card makes your kingdom grow. You just have to follow 3 simple rules:&#10;&#10; Apart from the first card, each following card must be placed adjacent to the card which is already on the table.&#10; Your kingdom has to form 3x3 square.&#10; The cards can be added freely and don&rsquo;t have to match the ones already added to the kingdom.&#10;&#10;&#10;After completing their kingdoms the players go to the scoring phase. Firstly, the players receive the edict cards, starting with the &bdquo;Kingsroad&rdquo; edict. It goes to the player with the longest connected road in the kingdom. Next, the rest of the edict cards are handed to the players who met their requirements.&#10;Additionally, the players score points for the individual terrains in their kingdom. The terrains with the highest number of different symbols generate points, which are then indicated by the scorecards. &#10;The player with the highest score is the winner.&#10;&#10;