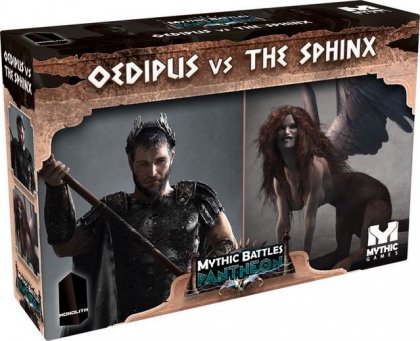 This Kickstarter Exclusive expansion contains one of the most unhappy characters in Greek myth, illustrated by one of our favourite pieces of art from all the many pieces we have had done for Mythic Battles: Pantheon.&#10;&#10;This expansion contains just two miniatures: Oedipus and the Sphinx, but they are potent forces in the game. They both have unique playing styles, which add an interesting twist whether they&rsquo;re being used in their dedicated campaign or in skirmish mode. Lots of replayability squeezed into these two.&#10;&#10;That dedicated campaign I mentioned is a special 3-scenario mini-campaign, built around the conflict between these two characters: The Riddle of the Sphinx.&#10;&#10;Of course, the pack also includes all the cards and dashboards you need to play these characters in the game.&#10;&#10;