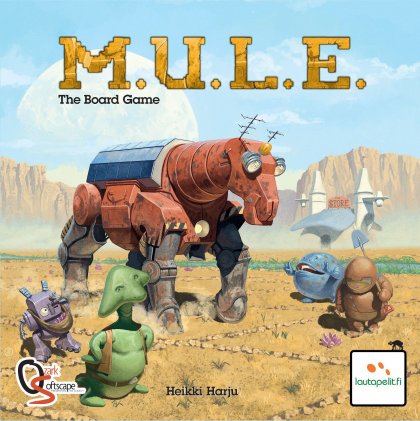 M.U.L.E. was first published as a computer game in 1983. Inspired by board games, it became a breakthrough, then a classic. Now this warm-hearted game of cut-throat capitalism is finally available as a board game!&#10;&#10;In M.U.L.E. The Board Game, you are one of the pioneering and industrious species of a Galactic Federation. Together with your fellow colonists, you attempt to settle the distant Planet Irata with the so-called help of a mule-like machine you all learn to hate. But for now, he's all you've got. Well, him and your fellow colonists. I wouldn't count on their help, though &mdash; not unless there's profit. Good luck. You'll need it.&#10;&#10;In M.U.L.E. (abbreviated from &ldquo;Multiple Use Labor Element&rdquo;), players claim plots of land and install mechanical robots (M.U.L.E.s) to work on them. M.U.L.E.s produce goods that colonists can use, sell for profit, or stockpile for (hopefully) even more profit:&#10;- Smithore is a metal that cannot be used by players directly, but can be sold to The Store. The Store uses Smithore to manufacture M.U.L.E.s. Since players need M.U.L.E.s to produce their Goods, they must sell Smithore to increase their production.&#10;- Crystite is a luxury mineral with a highly volatile price. It is not needed for anything on Planet Irata, but can be exported to other worlds for great profits (unless stolen by Pirates &ndash; you have been warned!)&#10;- Food is needed by players to take Development Actions, such as Assaying Lands or Installing/Refitting M.U.L.E.s.&#10;- Energy is needed to power M.U.L.E.s. You'll know the value of Energy when you lack it.&#10;&#10;There will be unexpected surpluses and shortages of different goods, causing market prices to fluctuate. Players must plan ahead while maintaining flexibility to change their plans as all kinds of &rdquo;fun&rdquo; planetary disasters hit them. Interaction between colonists is highly opportunistic: they will gladly help you if there's profit in it for them. Or maybe not. You'll get to see the true colors of your friends by playing M.U.L.E. with them. The most cunning settler and trader receives fame, fortune, and the honorary title of First Founder! There is also an overall Colony Retirement score, describing how your colony succeeded (or failed) as a whole.&#10;&#10;