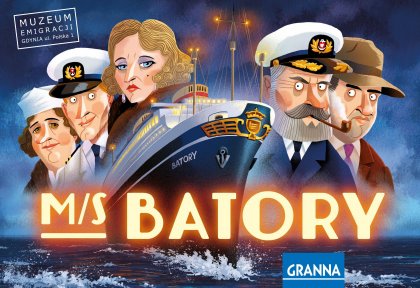 This was supposed to be a tranquil cruise across the Atlantic on board the ship MS Batory. The promise of an unforgettable trip from Gdynia to New York attracted onto the ship's deck the most prominent personas, who wished to take part in the adventure of their lives. No one suspected that the scenes taken straight from the bestselling crime novels will soon unfold aboard the legendary transatlantic ship. Audacious theft of the countess Pawlicka's priceless jewels has shaken both the passengers and crew members alike. However the most shocking fact is undeniable truth that the thief is hidden among them...&#10;&#10;MS Batory is a deduction game, which in innovatory way makes use of three-dimensional game board. The players take a role of detectives, and their task will be to identify the thief as quickly as possible. Each character from among thirteen suspects has a set of unique features - gender, age and a role. The players will ask each other questions, based on which they'll be able to determine the innocence of the suspects. At the beginning of the game, one of the cards which represents characters will be randomly selected and put aside - this character is a thief. The rest of the remaining cards will be distributed among the detectives.&#10;&#10;The player's round consists of the two phases:&#10;&#10;1. Movement Phase&#10;&#10;The players move characters around the deck of MS Batory. They have at their disposal a three-dimensional ship, which consists of several dozen rooms, located on the three separate decks. During this phase, the Players will move characters and perform different tasks - like for example: &quot;Meet up with the member of the crew&quot; or &quot;Go to the observation deck&quot;. By performing those actions they will gain question cards, which are used later during investigation phase. Characters need to be moved around the ship so that current task is completed as many times as possible. All the while it has to be remembered, that arrangement created by character's placement can hinder or help when it is time for asking questions in investigation phase.&#10;&#10;2. Investigation Phase&#10;&#10;During movement phase, the players had gained question cards. Each of these cards contains one trait - age, gender, role, number, room or deck. Using these cards, the player will formulate a single question, which he will ask to another detective. This question can be of any kind, but it has to be based upon the question cards at a player's disposal.&#10;&#10;For example, when in possession of cards: &quot;gender&quot; and &quot;deck&quot; the player can ask another detective &quot;Are there any women among your characters which are currently on the observation deck?&quot; On the other hand, having a more varied set of cards like &quot;age&quot;, &quot;role&quot;, &quot;number&quot; and &quot;room&quot; allows for asking more detailed questions such as: &quot;How many of your middle aged crew members are currently in the cabin?&quot; Skillfully asked question allows the detective to eliminate further characters from his list of suspects, without giving away too many clues to the rest of the players.&#10;&#10;The winner is the detective who first identifies the thief!&#10;&#10;