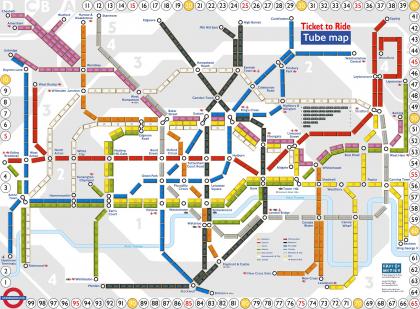 From the creator's webpage:

London Underground
In 1931 Harry Beck, a signal officer at London Transport, designed a map of the London Underground System, that today has become the standard for tube maps all over the world. However, the British transport authorities was skeptical about the map that Harry Beck made in his spare time. The passengers, on the other hand, were very satisfied, so soon the map became the official map of the London Transport. Harry Beck was paid around £5 for his effort!

My Tube map is a representation of the Tube map as of 2007 (notably with the Circle Line still a "circle" rather than the "spiral" it is today). I have used appropriate colors for the different tube lines, but I had to use yellow for both Circle Line and the DLR; white is used for both Hammersmith & City and the National Rail. Piccadilly and Victoria Line share the same blue color; District and Waterloo & City lines share green. I also had to invent some new stations, where the different lines cross.

The map can be printed on 8 A4-pages using either the PDF or the individual JPGs in the ZIP-file. The destination cards is designed to be printed on Avery C32011/C32016 (Business Cards) or on plain A4 paper. There is an optional backside included in the set.

Rules
In order to play using the map of the London Underground, you need the trains, the colored markers for each players and the train cards from the original game (either the USA- or the Europe-version). If you don't own the game, I encourage you to buy it. The Tubemap can be played by using the rules from the USA-version or the Europe-version. However since there isn't any ferries or tunnels on the map (despite the fact, that it is map of a underground-system!), you only need the stations from the European version.

The destination cards is divided into two categories: short routes < 17 and long routes > 17 points. In the European version of the game, each player is dealt three short routes and one long route at the beginning of the game and has to keep at least two routes. In the USA-version, the destination cards is mixed and you are given three to keep one.