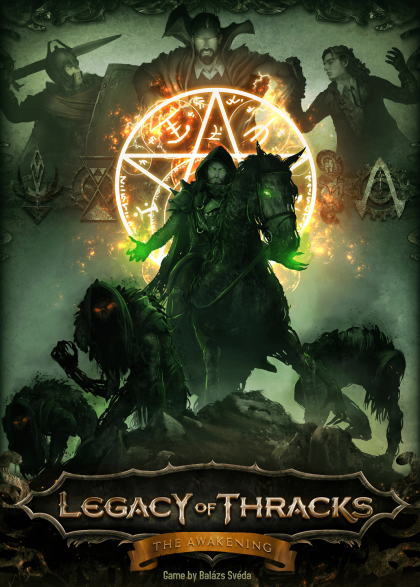 Legacy of Thracks: The Awakening

Legacy of Thracks - The Awakening is an Euro-Ameri hybrid, competitive, epic fantasy game with unique semi-coop elements.&#10;&#10;You control one of the clan Heroes (Warrior, Mage, Engineer) and your goal is to reach the legendary city of Dimara in 9 days, otherwise, the Shadows fulfill their destiny and destroy the world. Or control the Shadow Hero, and prevent the others from entering Dimara. Besides your Hero, there are Lost Souls, who you can control. But be careful because other players can move them too.&#10;&#10;During your journey, hire Lost Souls to bring hidden crystals to the surface and collect relics. Use these crystals to complete secret quests and overcome magical barriers. Move your Hero and capture villages to take special advantages, build roads or capture a Fortress to increase your glory, or capture Castles to increase your income. Fight with other Heroes in the right moments, and via Portals surprise them in critical situations! Take specific actions to improve your Hero's special skills and use them wisely.&#10;&#10;And don't forget: time is running out, and sometimes you need to make sacrifices together with other clan Heroes to slow down the Shadow!&#10;&#10;Infinite replayability comes from:&#10;1. high direct and indirect interactions between the players&#10;2. many game modes (basic, clan, shadow with semi-coop elements, solo, team (2v2), full-coop)&#10;&#10;