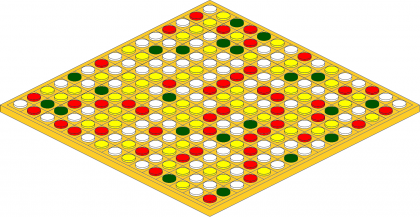 Leapfrog is one of those games about whose origins we know very little. It was invented some time before 1898, as the game historian H. J. R. Murray invented his own variation on it in that year.
It is an unusual game in that any number of people can play, almost without limit.

It is played on a square grid, whose size is 15 to 18 squares on a side. It is essentially a multi-player solitaire, where a player can make multiple jumps as in draughts. The winner is the person who has captured the most pieces when no more moves are possible.

In the original, pre-1898 version, the pieces are undifferentiated. In Murray's 1898 version, pieces have colour to denote scoring, some pieces being more valuable than others.