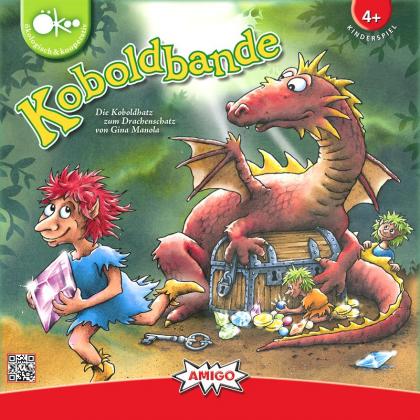 It's a race for the treasure in Koboldbande, with the player kobolds working together to create a path to the treasure before the dragon can get its talons into the chest first.

Before the game begins, players seed the 6x8 game board with four keys and a candy tile by rolling two dice — one color, and another symbol — and placing the tiles on the appropriate locations on the game board. Shuffle the 27 path tiles and 10 dragon tiles together.

On a turn, a player draws a tile. If it's a dragon tile, she places it on the first empty space on the dragon path; if a path tile, she places it at the end of a path already on the board. (The first path tile is placed in the upper-left square of the game board, while the treasure is below the lower-right square.) If the path is placed on a key, the players claim the key. If the path crosses the candies, the players can place one dragon tile on the candies, delaying the dragon on its way to the treasure.

Once the players have collected three keys, they can then lay a tile on the treasure chest — and if they reach the treasure before the dragon does, they win!