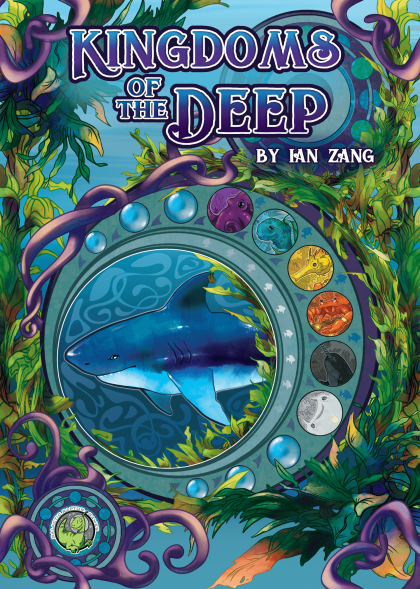 Kingdoms of the Deep

While the battle for the five kingdoms rages above the ground, there is also unrest and conflict happening below the surface. In Kingdoms of the Deep, you control six underwater factions and vie to control the most underwater territories, while gaining the most influence to call yourself ruler of the Underwater Realms.&#10;&#10;Kingdoms of the Deep is an area control and simultaneous action selection game for 1-6 players that plays in about an hour. Balance deploying your aquatic forces across the capitals of Atlantis with fulfilling specific goals while also trying to be the only player to choose a specific action each round.&#10;&#10;Each round, players choose their actions simultaneously, then reveal. Players then take their turns in turn order and get a bonus if they are the one that round to choose that specific action.&#10;&#10;Players gain reputation (points) by fulfilling round goals that and having the majorities in the capital tiles during the scoring rounds.&#10;&#10;When at least one player has played the Reset action in a round, the game tracker advances. Once the game tracker advances 9 times, the game is over and the final scoring happens!&#10;&#10;-description from publisher&#10;&#10;