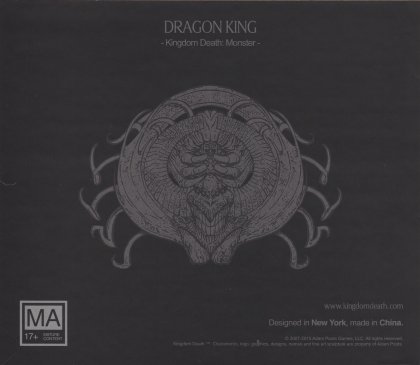 The Dragon King's species is long dead. It remains alone, clinging to the memories of its once mighty race. Its destructive moods swing wildly from impotent rage to obsessive nostalgia. It stalks the darkness, lashing out at anything it meets. Survivors that run across the moody monster usually fall prey to the unseen waves of ruinous pain that emanate from the monster's glowing heart. Those survivors lucky enough to drive off the monster will be amply rewarded with a trove of new armaments crafted from the abandoned husk of the monster's body.&#10;&#10;The Dragon King is a major content expansion for Kingdom Death: Monster that adds a whole new huge monster, new armor kit (2 male and 2 female as usual), rules, AI cards, hit location cards, new special resources, settlement events, innovations gear and new lore to the game. Everything you will need to step up and challenge this dangerous entity.&#10;&#10;