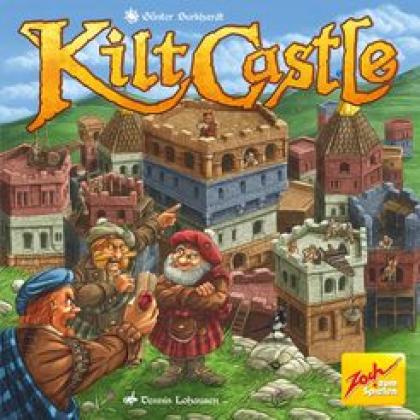 Kilt Castle adds a simple and highly interactive card mechanism to the classic Euro game genre of outbuilding one's opponents in an attempt to control the largest territory.

The game board shows a grid of 5x5 squares. Ten cards are placed beside the first four rows in stacks of 4, 3, 2 and 1 card. On their turn, the player picks up an open card from one of the stacks next to the game board and places it in another row — always in a clockwise direction. All players whose colors are on that card (one or two) are then allowed to build a new tower or build on top of an existing tower in this particular row. Building on an open space is free, while building on top of somebody else's tower costs as many ducats as the number of "floors" already built. A player can decide to trigger a general round of scoring simply by moving the last card of any stack. High towers are a good way to claim a large, connected territory and collect a lot of ducats.