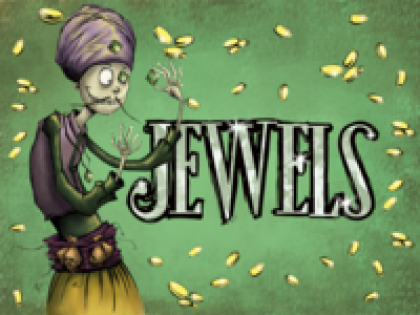 Descrizione tratta da Boardgamegeek:
The goal is to become the richest merchant by hoarding as many Coins as possible. Each Player earns Coins by selling crafted Gems and Jewels. The game is divided in Turns, every Turn is completed when each Player completes his Round.

At the start of the game the cards are placed in two rows, Characters and Gems, for a total of seven columns. Each column represents a City. Every city has two slots one for a Character one for a Resource.

During his Round a Player can execute three Actions from a list of six:

Travel to another City
Buy Gems or Gold
Craft Jewels or Gems
Interact with a Character: Sell a Jewel or a Gem, hire a Mercenary or fight a Monster
Refill City slots if empty
Earn a Coin


The Player can travel between the columns, which represent Cities. Traveling between Cities costs Coins.

The Player can buy a Gem from his current City and add it to his hand.
Before a Jewel or a Gem can be sold, the Player has to spend a crafting action to lay the cards down. To craft a Jewel the Player needs also the right combination of Gems and Gold. So each Player always has a round to plot against the seller.

Selling a Jewel or a Gem to a Buyer means discarding it and earning its value in Coins. Mercenaries and Monsters can hinder or favor the Players. After a Player interacts with any Character, the card is added to the discard pile.

At the beginning of each turn the Cities are repopulated with new Characters and Gems. At this time many Events can be triggered.
The game ends when a City can’t be refilled at the start of the Turn.

The Player with most Coins wins the game.