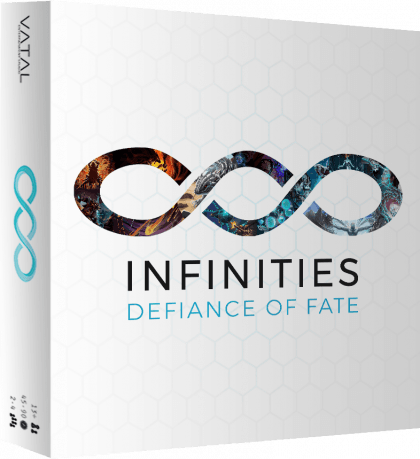 Infinities: Defiance of Fate is a 4x-lite adventure game based in a cross-over setting of fantasy and science-fiction worlds connected by multiversal rifts. As these rifts open, factions from each world collide as their realities blend into one another. However, the cross-over doesn't end with the story. The game boasts a hybrid gameplay style, blending strategy card game and tactical 4x mechanics with narrative elements. A leader acts as your avatar in the game&rsquo;s worlds. Leaders are represented as a board with a set of actions, three attribute tracks, and a reaction track which holds resource tokens. The basic round structure begins with all players setting one action die matching their map tile, rolling 3 more dice (with an optional reroll), then spending dice to take actions one player at a time. Action dice allow you to play unit and action cards, attack enemies, and explore and control map tiles. Units and leaders add new twists with their own unique actions while in play. At the end of the round, all leaders reset their hands with new cards, a Rift tile morphs the worlds it is connecting, then players check for objectives and Influence.&#10;&#10;Infinities offers two primary game modes: Story and Skirmish. In Story mode, two factions use a Story Guide to follow a branching narrative campaign with varied, asymmetric actions, objectives, and win conditions. Based on the events and outcomes within a chapter, players will proceed to one of many possible chapters and make a thematic change to the game's assets for the remainder of the campaign. These changes range from removing leaders, shuffling cards into other decks, or permanently increasing action dice. Additionally, each chapter may change allegiances, leading players through free-for-all, team, one vs. all, and cooperative engagements. This makes it quite likely that players will experience both sides of the story throughout a campaign. Also included in the Story Guide are solo quests for each of the game's leaders, offering scalable challenges with multiple endings.&#10;&#10;In Skirmish mode, players strive to collect more points than their opponents from a set of objectives. Skirmish mode functions as an ideal way to learn, practice, and master the game in friendly or competitive matches.&#10;&#10;With shared or separate decks, dice-based actions, shifting turn order, a player-created game map, optional unlockable powers, a myriad of dynamic victory conditions, and session-specific actions, you&rsquo;ll find that the possibilities in this game are infinite.&#10;&#10;