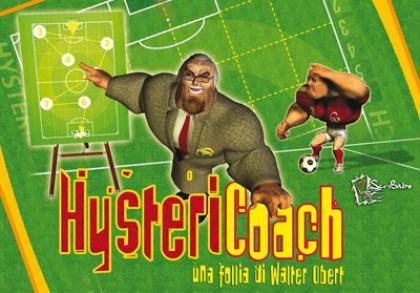 This is an original party game for 4 to 14 players. Players are split into two "football teams" composed of a single "coach" and a number of "players".

The board is composed by a "football field" gridded board, 2 small dice, 3 normal dice and some "action cards" showing the position that each wooden "soccer player" will have to reach in the field.
In addition each team has 2 team-rose(?) cards and 8 full color wooden soccer figures with a number on the back and front.

The prototype I tried contained 3 teams: Japan, Greece and Eastern-Europe. The soccer player names are quite hard to say because the author deliberately invented really strange and long names.

To win you have to put the ball in the net more times than other team.

The game is noisy and hilarious. Each coach gets an action card. Each player get a "number" that represent the t-shirt number of the figures they will control (more than one there are less than 14 players).

Only the coach see the action card and have to call BY NAME (of soccer players not of the people playing the game) to indicate where to move to without talking, without indicating the wooden soccer players. The only way to communicate is to give him indications with his hands or miming something as real coach do.

All the players stop play. If the team is positioned exactly as the action card requires, the last player who moved a wooden soccer player for the team throws a die to score a goal.

Some penalties are given to the coach for performing forbidden actions (like calling wooden soccer players by number or indicating it by pointing) and if the action card is not correctly reproduced.