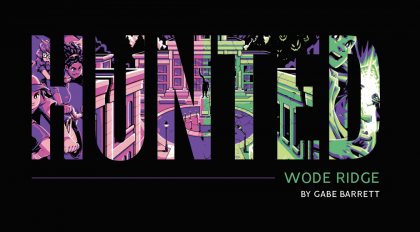 They say the town of Wode Ridge has been cursed ever since Amos Wode founded the place way back in the 1800s. The sleepy, Colorado tourist trap looks plum peaceful in its postcards, but there&rsquo;s a darkness about the town you can&rsquo;t quite put your finger on. Some even say the town has an &ldquo;other side&rdquo; where the crazy roams unchecked, but I can&rsquo;t speak much to that.&#10;&#10;By the 1980s, things had gotten especially weird--at least until a bunch of kids started snooping around trying to get to the bottom of the town&rsquo;s supernatural goings-on. While the adults were worried about their Tupperware parties, these youngsters were out tracking down clues and finding trouble before it found them. And rumor has it they found some kind of creature in the woods too which might explain all them FBI fellers around here asking questions.&#10;&#10;And here they come now, riding around town on their bicycles. I just hope they figure things out soon. Looks like some kind of dark cloud is rolling in right behind them.&#10;&#10;Overview:&#10;Take on the role of a group of kids and their newfound alien friend, and explore Wode Ridge looking for evidence of the town&rsquo;s supernatural happenings. But be wary, the Darkness knows you&rsquo;re on to it, so it&rsquo;ll be trying to get you before you get it. Find enough evidence to figure out what monster is currently ailing the town and then defeat it before time runs out and the Darkness overtakes you.&#10;&#10;&mdash;description from the designer&#10;&#10;