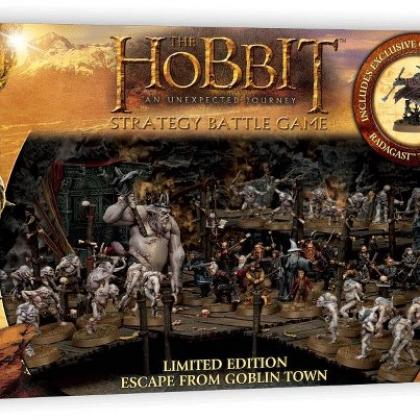 The Hobbit: Escape from Goblin Town

Re-live the action from The Hobbit: An Unexpected Journey. Thorin Oakenshield's quest to reclaim the Dwarven Kingdom of Erebor takes his brave band of Dwarves - accompanied by the Hobbit, Bilbo Baggins, and the mysterious Wizard, Gandalf the Grey - far across the trackless wilderness of Middle-earth.

This is a 25 mm Miniature wargame that features; collecting, painting and conversion of miniature figures used in play, as well as the modeling of gaming terrain. Using D6 dice to resolve the actions and moving by tape measuring.

The standard game is played with two or more armies on a board generally 4 feet long and 4 feet wide (48 inches or 120 centimetres), usually deployed within 6 inches of opposite board edges. Played in several scenarios developing the story of the hobbits escape of the Oks town.