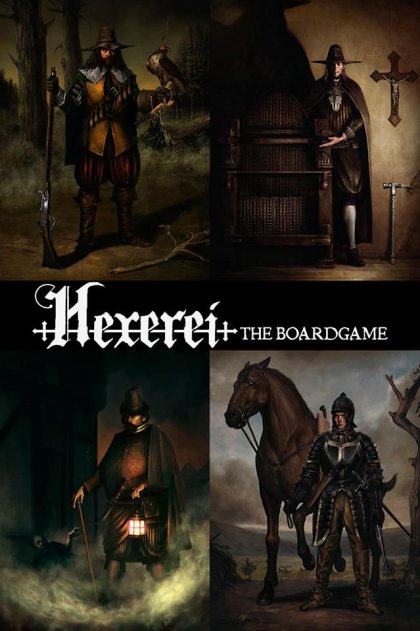 Hexerei: the Three Witches of Würzburg

Hexerei is a 1 vs All game of combat and cooperative maneuvering, set in a broody, war-torn 17th century Germany. Up to four players will play as Hunters tasked with finding and slaying the Three Witches of W&uuml;rzburg before the opposing player-led Coven completes the Ritual.&#10;&#10;Hunters will interrogate Prisoners from the Tribunal Deck to reveal unknown tiles on the gaming board in order to find Arcana Tiles. These allow to draw &ldquo;leads&rdquo; from the Arcana Deck and ultimately force the Witches to reveal themselves and fight. Hunters need to act fast, because the Coven will complete the Ritual in 8 turns.&#10;&#10;The Coven&rsquo;s powers are great, but its fight against time is no less dire. The Coven&rsquo;s player controls each turn&rsquo;s conditions by drawing from the Orbis Deck and can deal gruesome spells from his Maleficia Deck. He gains power from the Ritual and can summon Creatures. Each of these is based on the darkest German myths and can go toe-to-toe with any Hunter, but at the same time is specialized in a tactical role and could easily be wasted.&#10;&#10;The Hunters and the Coven fight for board control: each struggles to mix favorable cards into the decks controlled by the opponent. A streamlined dice combat system favors decisive action, hard choices and risk-taking. Cooperation and resource-pooling is needed between Hunters to secure equipment and plan actions against the Coven. Rash decisions can spell ruin for both sides, since the number of Hunter &ldquo;lives&rdquo; are limited, and each Creature can only be summoned once. Each game set will contain original art and (unpainted) miniatures for Witches, Creatures and the Hunters.&#10;&#10;-description from designer&#10;&#10;