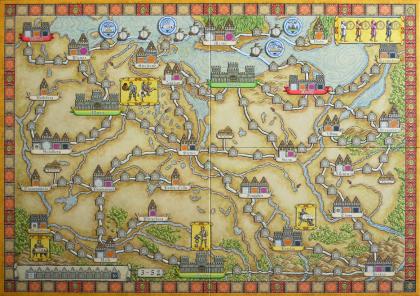 This is the first expansion for Hansa Teutonica. This expansion includes nine mission cards for the basic map. Each mission card shows three cities and the player can receive additional victory points for Kontors in these cities.

In addition the expansion includes a new map: The East-Expansion
This map introduces new items into the game: e.g. Ocean trade routes and permanent bonus markers.

Errata: The rules erroneously mentions the 'Kontor Network', points being given when building the East/West-connection between 'Leipzig' and 'Danzig'. There is no 'Leipzig' on the map. Instead the rules should have stated the city of 'Lübeck'.